Greetings from California, where I celebrated America’s National Day by strolling with an old friend from Schafer Park, and dining with the legendary Carlbob. And Lizziebob made a lemon meringue pie with homemade ice cream!

My health still wavers, but it continues to improve overall after hitting bottom again last winter, a condition that I think was exacerbated by unexpected reactions to some prescriptions.  So I’m more on track now. Three years ago, it would have taken me a week or longer to write something like this. This time, I started and finished a first draft on the same afternoon.

At this point, though, I see some sort of health professional almost every week. It’s hard to imagine that I had gone decades without seeing anyone but my dentist, dental hygienist, and optometrist.  Finally, my dad had kept nagging me to get an annual checkup, but for years nothing interesting was noted.  I guess I’m making up for all that now.

Meantime, I’m still limited in my activities, so I end up spending time reflecting about the past and so many fine memories which remind me how lucky I’ve been for most of my life.

Some of these memories have been evoked under the auspices of a cognitive psychologist. It’s really quite amazing how unresolved, unprocessed, and half-forgotten issues from way back in one’s life (as well as more recent stresses) can result in physical pains and weaknesses in the present time. It also helps explain how simple messages and support from people on this list have provided actual physical pain relief since I returned from China.  And I am thankful for any and all  such messages.

And again I have to particularly thank my friends Jim and Karen for their active support in getting me through all this.

Speaking of my father, who lives in Arizona, he recently downsized into a smaller apartment, so he sent me two original manuscripts that his father Charles had written, back in 1948. One was an autobiography and the other a biography of Charles’s own father, Peter, my great-grandfather, on whose bed frame I still sleep today (with a newer mattress).

Peter MacFarlane was born in 1848, saw service in the Civil War, and spent most of his life in the logging business. Charles (born 1870) worked with him for many years in the same business. Since the two men had worked together so long, the two manuscripts often describe the same events, though stressing different details. So I folded the two narratives into a single document. 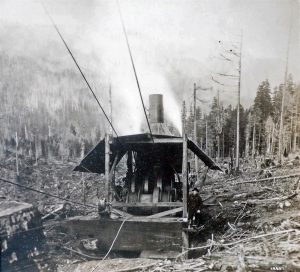 It was really fun to do, actually, and it provided yet another example of how lucky I’ve been, since I guess that most people would not have such manuscripts available. The world they describe differs from ours not only because of the century that has passed, but also because logging is its own cultural world, one that most people today have little contact with. It was a world of great technological progress, and of great danger. Take a look at the man in this picture, which accompanied the manuscripts. He drives a “donkey engine,” like a Lilliputian among giants, any one of which might casually snuff him out.

And it was a world where physical strength was paramount, since one’s logging skills mattered little without the strength to wield them.

Anyway, in case anyone would like to see what I’m talking about, I’m attaching just my great-grandfather’s biography to this message (since the combined document is just too long). Peter C MacFarlane small-sized pages

My new car still runs well, and I feel that anyone who ever tries driving an electric engine will love it. It develops power at much lower speeds, and the power is smooth. 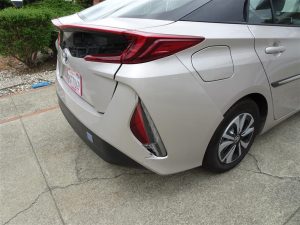 That said, I have a couple complaints, which seem to apply to many modern cars. The first is its fish shape, which means that the view out the back is severely limited, even with a back-up camera, compared to what I’m used to. This resulted in my backing up in the dark into a low brick wall, an event which leads me to my second complaint.  My old cars always had bumpers, so such a bump at such a low speed would have been felt and no damage would have been done. The new cars have egg shells instead, so when I backed up, I perceived nothing until a loud noise announced the breakage, as seen in this picture. It will cost $1600 to fix it!

<sigh> It makes me remember a Spanish teacher from Buenos Aires whom I knew many decades ago. In that city, she said, nobody set their parking brakes, because the city was absolutely flat. So instead of parallel parking between cars, you’d just go the end of the block and push everybody forward with your bumper until you had created a parking spot for yourself.  I don’t think that strategy would work any longer, even in Argentina! 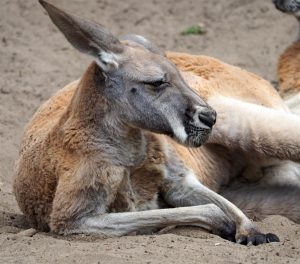 I still regularly take advantage of my zoo membership, and have visited both the Oakland and San Francisco zoos recently to take pictures.

I went to San Francisco to snap some shots of a kangaroo, since I’ve started making my calendar for next year, which is the year of the rat, and kangaroos are “pocket rats” in Chinese. I will probably include this serene specimen. 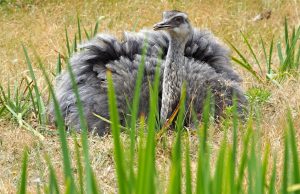 And here’s a resting rhea to go with him.

When I was a student at UC Davis many decades ago, I organized a German polka band for our dorm. At the time I was also in the university marching band.

When one of that band’s officers heard about the polka band, he suggested that I borrow some old uniforms from him for my players. At the time, a large storage room in the main administration building held dozens, maybe hundreds, of old uniforms. So I borrowed a few. However, he never told me when they were needed back. 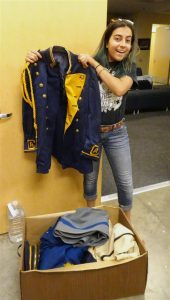 So this year I emailed the band to find out more. I arranged to finally return them to the present uniform manager, seen smiling with my box of old uniforms in this photo.

It was also a chance to visit one of my pseudo-nephews, who lives in Davis. And I’m really proud of the two of them, since they will both be gainfully employed starting this fall. The one in Davis will be a lecturer in mathematics at the university, and the one in San Jose will be helping to coordinate groups who work with gang members and former gang members. Such great news. 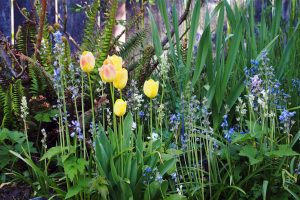 Actually, though,  that house’s garden, after a century of our family’s occupation, was already full of flowers that came into bloom at various times throughout the spring, one on top of another in sequence.

I also saw my old grey-beard Chinese friend Ma Min in Portland, whom many on this list also know. We got together at the Children’s Hospital in Southwest Portland, mainly because of the spectacular view, as seen in this picture. He had relatives in tow, whom I remembered meeting in Tianjin in 2001.  Small world! 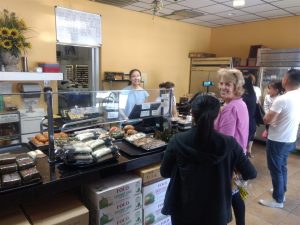 And my California neighbor Joanne told me about this tofu delicatessen in southeast Portland. Not only is the quality excellent, but the fried tofu comes in various flavors as well. I haven’t been able to find the like in the California Bay Area, so if anybody knows of one, please tell me. 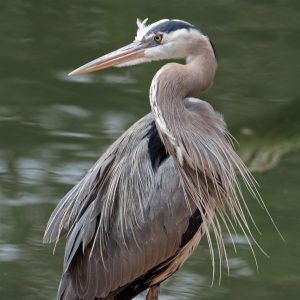 A while back I wrote about the scandalous goings-on at our southern border, and particularly the inhumane treatment of children, mainly central Americans, seeking asylum. As someone who spent an entire career advocating for children, I found my own country’s strikes against them to be particularly offensive and tragic.

Since many on this list, particularly those in other countries, might not be following this story, I feel kind of obligated to mention it, since it’s still going on, though it now seems that people of all ages are being herded into camps and cages, treated with the same disdain, and this as a matter of policy. 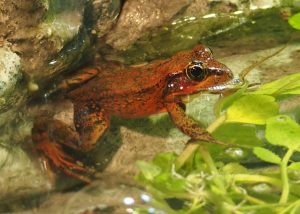 American Jews and Japanese, having had their own experiences with ethnic detention camps, are often on hand to protest these present-day versions, which are not only overcrowded, but dirty to boot, and in one case, located on the site of an old detention camp for Japanese Americans.

The present administration paints these asylum seekers as criminals, which they are not. They are mainly fleeing death from gangs (such as the American gang MS-13, which branched out into Central America) or from starvation, since climate change has resulted in record droughts and failed crops in the region. 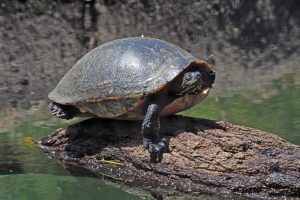 This treatment does not represent the American ideals that I was taught as a child.  Such treatment is not in the character of anyone I know.  And it’s also shameful to have a secretive head of state who so artfully employs all the antisocial behaviors that we school teachers all teach our students to avoid. In this sense, then, I’m glad I’m not a primary school teacher at this moment to have to explain it all.

I wanted to end by recommending a musical group called “I’m with her” – three women playing something similar to bluegrass, but with surprisingly sophisticated harmonies at times.  It’s hard to believe that someone like me, who doted on groups like the Art Ensemble of Chicago for so many years now likes music so blatantly tonal.

I first heard them a year ago on (where else?) an NPR tiny desk concert here. They recently posted a wonderful full-length concert here which I often leave playing while writing.

I hope everyone has a wonderful summer, and I’d love to hear from you.